This study was commissioned as part of the South Lanarkshire Rural Partnership’s Market Towns Initiative. The team was led by Kevin Murray Associates with WMUD, Nick Wright Planning, Hamilton Baillie Associates and VivID. This Initiative focuses on the four rural market towns of Biggar, Carluke, Lanark and Strathaven. It aims to support the establishment of an asset-based approach to community development, in order to ensure the sustainability of both local delivery organisations and community assets. One of the objectives of the Market Towns Initiative is to establish a community owned asset base that can recycle income into community project development. This study is envisaged as playing an important role in informing the Market Town Initiative’s future project agenda in Biggar.

By showing how initiatives contribute to a long term vision and strategy for Biggar, this study aims to maximise their chances of gaining future funding. But we must warn that inclusion of an initiative in the Biggar Agenda is not a guarantee that funding will be available. Equally, we have deliberately been cautious about the level of funding which might be available, and have therefore put forward a package of proposals which are reliant on minimal external funding and support.

We are of the view that the projects which are most likely to succeed are ones which develop their own income streams, re-investing their income and avoiding reliance on external financial handouts. We realise that this puts responsibility on local people to take things forward, and have tried to support. But we believe that an agenda which relies largely on external funding and support would raise community expectations beyond what realistic levels.

Our own involvement in this study was working with Ben Hamilton-Baillie to develop a set of proposals for mitigating the impact of traffic not only through the town but also at community assets such as schools, meeting points and health and community centres.


Many of the spaces and landmarks that give Biggar its special character and identity have been eroded over the years by an over-emphasis on highway measures and the wide dimensions and sweeping geometry associated with trunk roads. Restoring the balance between movement and the social and economic benefits of place-making emerged during the study as an important element in securing Biggar’s future. Although the proposals described below focus on changes to traffic, parking and movement, these must be seen as part of a broader strategy aimed at improving sociability, economy, quality of life and environment.

An important element is making the High Street and town centre more pedestrian and cycle friendly. Of course, reducing the impact of vehicles and traffic in the town will do far more than simply improve the town’s appearance: it will also improve road safety, allow people to walk and cycle within the town more safely and comfortably, reduce traffic noise, increase visitor numbers and benefit town centre businesses.

In broad terms, the proposals build on emerging best practice for traffic in towns and villages, drawing on examples from throughout the UK and mainland Europe. The principles here are intended to support The Biggar Agenda’s broader initiative of supporting and enhancing the economic vitality of Biggar. The ‘before and after visualisations’ illustrate some of the techniques for (a) reducing the impact of traffic and vehicles and (b) enhancing a sense of place at the various selected locations. They help to improve the legibility of key sites and places within the town, and are strongly premised around advantages in safety, civility and economic vitality from lower design speeds.

Notwithstanding the definition of the High Street through Biggar as a trunk road, our recommendations seek to achieve traffic patterns based on low-speed, continuous flow. A design speed of around 18-19 mph through the central part of the town would be achieved through a range of minor changes in paving, alignment and geometry consistent with the largely pedestrian context. Opportunities for informal crossings would be maximised, and would remove the requirements for signals, guardrails and controls.

The aim would be to achieve a closer match between the characteristics of the High Street and the spaces and morphology of the town. Wherever possible, street design elements would highlight and emphasize the specific context, such as the crossing of the burn near Cadger’s Brig and the presence of historically or visually significant buildings. Opportunities would be created to make more of local public spaces, such as potential for re-opening the ford by Cadger’s Brig and improving pedestrian access up The Wynd to Knocklea and Rowhead Terrace, for example.

The lower design speeds would, in part, be achieved through creating clearer entry points to highlight the key transition between the inter-urban highway (e.g. the A702 outwith the town) and the public realm within the town. This should involve attention to signing and road markings at the outlying entry points to the town to maximise the change from higher speeds to the low-speed context. In particular, we would recommend deleting (or not renewing) centre line markings from the carriageway at these points.

The key streetscape recommendations aim to strengthen the presence and legibility of two key “bookend” spaces at either end of the High Street, as shown on the plans in chapter 5. To the west of the town centre, the space around Cadger’s Brig and the ford, bringing together The Wynd, Park Place and Station Road, marks the transition between the A702 Coulter Road and the High Street. To the east, the buildings and green spaces fronting George Square and the site of the former petrol station (the site of the proposed Museum) would form the transition from the Edinburgh Road. Defining the town centre in this way will help to link the upper and lower parts of the High Street, an aspiration of local businesses.

The treatment of the road surface at the “bookend” transition points into the town centre, and also town entrances, is likely to include the visual narrowing and lack of markings shown in the visualisation for the High Street/School Green. ‘Before and after’ visualisations of this junction are shown in the accompanying images. It is a key junction between the upper and lower parts of the High Street where the width of the bell-mouth makes it hazardous to cross for pedestrians. A desire to improve this particular junction for pedestrians was clearly expressed by people of all ages.

Measures to strengthen and define a number of secondary spaces would also improve legibility and safety. These could include the square fronting the Gladstone Court Museum, the area fronting the Corn Exchange, the streetspaces fronting the primary and secondary schools, and the vicinity of the Health Centre. ‘Before and after’ visualisations of the latter are shown in the accompanying images.

A number of the very wide junction entrances onto the High Street could be reduced in size without loss of highway capacity to improve pedestrian continuity and safety. This is especially important for the John Street/High Street intersection and the B7016 junction (School Green, opposite the newly opened Sainsbury store). ‘Before and after’ visualisations of the latter are shown in the accompanying images.

Rationalisation of existing on-street parking arrangements is necessary for the reasons explained in chapter 4. We recommend consideration of a “restricted parking zone” throughout the town centre in order to reduce the need for yellow lines, to clarify parking patterns and to ease enforcement. 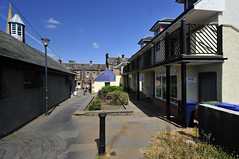 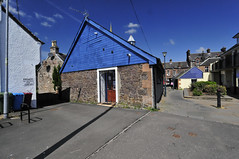 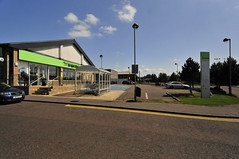 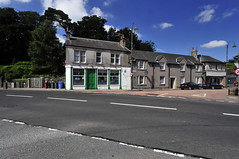 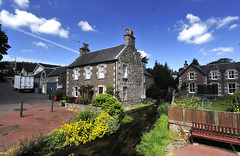 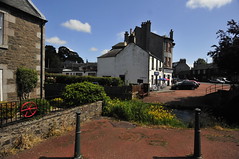 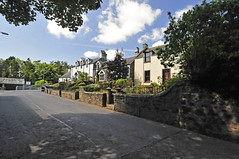 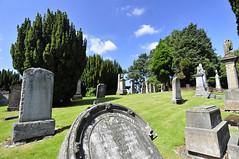 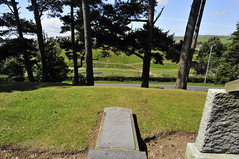 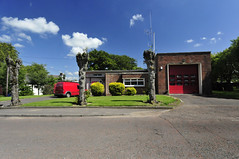 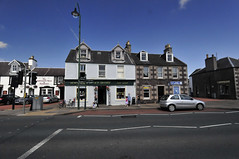 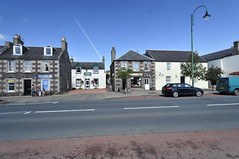