The decision to commission the study was prompted by concerns that the Mitchelston estate, which extends to more than 100 hectares and is one of the largest employment areas in Fife, has lost direction and focus. The brief highlighted issues including the poor condition of some large older properties on the site, poor legibility, variable standards of management and maintenance and the incursion of leisure and other non-employment uses. The image of the area has suffered as a result, affecting the willingness of owners and occupiers to invest. During the study, Havelock International – which occupied a large site on the eastern edge of the estate – went into administration and ceased trading.

The following sequence shows the evolution of the site since the mid-1960s when it was mostly undeveloped. By 1973, the A92 dual carriageway had been completed and several large factories had been built on the east side of the modern estate, close to Mitchelston Drive (Figures 1 and 2).

Twenty years later (in the mid-1990s) some limited infill had occurred, but the most significant development was the construction of the ASDA superstore on the south-west corner of the site (Figure 3). There was significant change in the following decade: by the mid-2000s infill had intensified in all parts of the estate and extended to the west; more car dealerships had opened on the south side of the estate. The first buildings had been completed on Dunnikier Business Park, but the Strand Lighting factory closed in 2005 (Figure 4).

Business owners and managers we spoke to were keen to stress the positive qualities of the Mitchelston estate, especially its attractive landscape setting and views of the Firth of Forth. Everyone recognises that it is a mixed picture, and there are concerns about the impact of fly-tipping and unofficial travellers’ sites, but the consensus is that positives outweigh negatives. The site has potential for improvement to its amenity and efficiency as a business location, even without major structural changes.

The following selection of images reflects the diverse character of the Mitchelston Industrial Estate in terms of its buildings and landscapes.

This report has analysed conditions and prospects at the Mitchelston Industrial Estate and appraised options for the future. The report presents a mixed picture. Mitchelston continues to be a valuable economic asset and an important source of local jobs in Kirkcaldy, and large parts of the site have adapted successfully to changing economic circumstances. But elsewhere, especially to the east, old factories and large sites have been vacated. The estate is not in crisis, but there are warning signs, and the problems are compounded by, among other factors, fragmented ownerships, run-down properties and an overstretched roads network.

In many ways Mitchelston is an outdated business location, out of step with the needs and aspirations of businesses and workers in the mid-21st Fife Council has declared a climate emergency but it is hard to see how Mitchelston, at least in its present form, is going to contribute to the goals of a low-carbon economy and reduced car dependency. Traditional industrial estates like Mitchelston will need to be retrofitted to extend their useful life.

The report argues that a do-nothing option would be unacceptably risky. Some of the trends noted in our report could, if allowed to continue unchecked, send Mitchelston into a downward spiral of underinvestment and physical decline. But, equally, we are not convinced that some of the more optimistic scenarios advanced in the course of the study are realistic and there is, for example, no compelling evidence of demand to support the case for the Zero Carbon & Business Innovation Park proposed in the Mid Fife Economic Study. There is no need to close the door on this option, but it must be considered highly optimistic at this point.

We have recommended a more realistic and pragmatic approach, which we have called Collaboration Plus. We concluded that this was the best way forward, in part because of the encouraging level of owner and occupier interest in our consultations, and by the positive attitudes of those who attended the workshop. Many businesses own their own premises and have a real stake in (and commitment to) the Mitchelston Estate. They recognise its strengths and potential as well as its weaknesses and, at least in principle, there is an appetite for working together to make Mitchelston a more attractive and efficient business location.

We also presented an illustrative menu of possible actions on themes including:

We propose that Fife Council should invite business owners and occupiers in Mitchelston to come together to develop and implement a five-year action plan for the Mitchelston Estate. As shown in Figure 8-1, we envisage five key steps to be completed by the end of 2020: 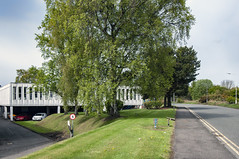 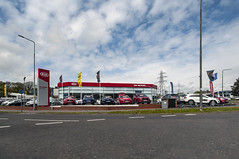